Tune in for the Peacebuilder ‘CJP at 25’ podcast!

A time capsule of Eastern Mennonite University’s Center for Justice and Peacebuilding (CJP) is in the works – not to be buried, but uploaded. The artifact in question is a podcast, which will feature ten CJP faculty and staff members reflecting on the history of CJP and their own peacebuilding work. The 10-episode series is set to launch on Wednesday Jan. 22, 2020, with a new episode dropping every other week on the Peacebuilder website. 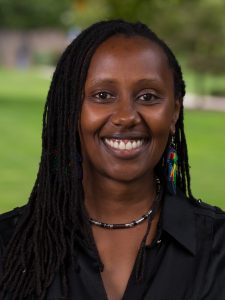 The podcast is the creation of Patience Kamau, a 2017 graduate of the program and also chair of CJP’s 25th anniversary committee, who wanted to give students, alumni, friends and supporters of the graduate program an in-depth look at where CJP has been, where it is now, and where it hopes to go.

“For the sake of posterity, this is emerging as a gem,” Kamau said. “These voices are here right now, many of them were here 25 years ago, and given the simple trajectory of life, are unlikely to be here 25 years from now.”

But why a podcast, specifically?

“It’s a way that a lot of people are consuming information these days. I think it’s a necessary long-form method of connecting with the audience,” Kamau explained, in contrast to the “fragmented” nature of social media posts. “When you’re doing it on podcasts, you can go into more depth, and you can connect with an audience in a different, more meaningful way.”

While the exact episode order is yet to be determined, Kamau said the pilot will feature Barry Hart. His interview acts as a primer to CJP, touching on elements like the Little Books of Justice and Peacebuilding series and curriculum design, which other interviewees then dive into more deeply. “It’s like passing on a baton,” Kamau said.

She asked each interviewee the same questions, based on the 25th anniversary’s theme of “celebrate, reflect, dream,” but of course “each one of them goes down a very unique path based on their own careers and life experiences.”

Kamau is an avid podcast consumer – she subscribes to at least eight, and regularly listens to others beyond those. That gave her an ear for what makes for a good listening experience, as she went into the project having to teach herself about audio production by looking up internet guides and tutorials.

Alumni Michaela Mast ‘18 and Luke Mullet ‘19 have also helped breathe life into the podcast. Mast, co-host of the climate justice podcast Shifting Climates, which is sponsored by the Center for Sustainable Climate Solutions housed at EMU, has lent technical assistance. Mullet, whose scores have been featured in recent documentaries and video games, is composing original music for the episodes.The podcast’s audio mixing engineer is Steve Angello who works closely with Mullet.

“There’s something organic about it, just doing the work in anticipation of what will emerge. It’s a work of art, where the overall beauty lies in paying attention to the details” Kamau said.

The episodes will be also available on Apple Podcasts on iTunes, Spotify, Google Podcast, Stitcher, iHeart Radio, and TuneIn.

Each episode presents an interview with the following CJP affiliates, listed alphabetically by last name as the exact episode order is yet to be determined.