I-81 Committee To Host Its First Meeting Next Week

HARRISONBURG — It has been more than two months since legislation took effect creating the Interstate 81 Advisory Committee, and by Tuesday afternoon the group will have its first meeting.
Per invitation by the Virginia Department of Transportation, the Virginia Department of Rail and Public Transportation and the Office of Intermodal Planning and Investment, the public can attend the committee’s first meeting to be held at 2 p.m. Tuesday in Lexington.
The meeting will take place at 401 E. Nelson St.
Sens. Mark Obenshain, R-Rockingham, and Charles Carrico Sr., R-Lee, as well as Del. Steve Landes, R-Weyers Cave, sponsored identical legislation during the 2019 General Assembly session to identify a funding source for the $2.2 billion in proposed improvements to the corridor.
Through bipartisan efforts, a funding source through a regional fuel tax, a statewide diesel tax, a higher road tax on heavy trucks and an increase in registration fees for heavy trucks was established.
The funding source, provided by Virginia Gov. Ralph Northam in March, provides a dedicated annual funding source to the corridor, estimated initially as $103 million in fiscal year 2020 and growing to an estimated $163 million in fiscal year 2025, according to a press release.
Legislation also called for the creation of a committee to be tasked with providing advice and recommendations to the Virginia Commonwealth Transportation Board regarding the development and updates to the I-81 Corridor Improvement Plan.
The committee is made up of 15 voting members — seven Virginia lawmakers, three
CTB members representing the districts of Bristol, Salem and Staunton, and five chairs of the planning district commissions.
VDOT’s commissioner and DRPT’s director will serve on the committee exofficio in non-voting roles.
Senators serving on the committee include Carrico, Obenshain and John Edwards, D- Roanoke. Delegates serving on the committee include Terry Austin, R-Botetourt; Chris Collins, R-Federick; Christ Hurst, D-Blacksburg; and Tony Wilt, R-Broadway.
Any questions or comments about the I-81 Corridor Improvement Plan can be directed to VA81CorridorPlan@OIPI.Virginia.gov. 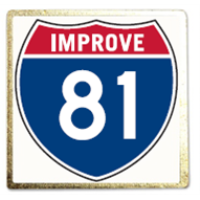