EMU’s original rock musical ‘U2 Romeo & Juliet’ is a gritty, rapturous tale of love in chaos

udiences at Eastern Mennonite University’s “U2 Romeo & Juliet” are in for a treat. A theater production that combines the artistry of William Shakespeare and the iconic Irish band U2 is exciting, intense and bold. The band’s poetic songs easefully carry classic themes of hatred and violence, love and reconciliation.

Live music performed by a skilled ensemble of actors and local band Prince Bellerose, with original videos, choreography and intense fight scenes, will also make this theater experience memorable. The rock musical, created by faculty members Justin Poole and Jerry Holsopple, not only tells the story of the constant human struggle between light and darkness, but challenges audiences to make a difference in today’s chaotic world.

"This is a play about the horrible things we do to each other and the need for us to advocate for peace and justice despite seemingly insurmountable odds," said Poole, theater program director and professor of theater

“The music of U2 works so well in this show because most of their songs mean more than one thing,” said Holsopple, professor of visual and communication arts. “It may be about love, but it is also about this other situation. It goes from lament to prophetic anger, from intense personal feelings to grand ideas all while balancing multiple narratives on the flow of text and music.”

Poole conceived the idea for the rock musical shortly after the tragedy of 9/11. His vision was sparked by his college professor’s creation that paired Shakespeare and The Beatles for a musical of “The Two Gentlemen of Verona.”

“I started envisioning a performance of ‘Romeo and Juliet’ set to the music and lyrics of my personal favorite band U2,” Poole wrote in the program’s creator notes. “It would be a much darker, morally complicated play that mirrored the new state of the world as I saw it: disordered, uncertain, violent, desperate.”

It took 20 years for anyone to be enthusiastic about his vision. Prepared for a discouraging comment, Poole told his idea to fellow-U2 enthusiast Holsopple, who unexpectedly replied, “That works. You want me to be your music director?”

“It took collaboration with Jerry to have it happen,” Poole said, noting they use the title of creators to describe their production roles. “We aren’t using any other titles. This is in keeping with the spirit of U2 who shares all their creative rights and credits.”

In January 2020, Holsopple and Poole chose 22 songs they wanted to include and then form the text around the music. They sent their proposal — including a script draft with music selections identified, as well as information about EMU’s mission—to U2’s publishing company, Universal Music Publishing. Eventually, they were put in contact with a band representative who said, “The band is going to have to review your proposal extensively.” With an upcoming tour scheduled, that meant a long turn-around time. However, in less than two weeks, on March 16, a rep emailed  to grant permission to use all 22 songs requested.

Royalties could have been exorbitant, but U2 asked a bare minimum, Poole said, far less than most staged productions.

The play revolves around Friar Laurence, portrayed by Dove, Holsopple said. “The Friar is like Bono, the storyteller. In a way, it’s the friar’s confession in his attempt to change the world and his failure.”

Dove was a U2 fan as a teen, and as “one of the older members of the cast,” owned a cassette copy of their first album. Aspiring to also sing rock and roll, he said, as a baritone, “the holy grail to me at the time was someday being able to hit that note…you know that one note in ‘With or Without You.’”

The songs function as soliloquies. Sophomore Greta Schrag said they provide her character, Juliet, an inner monologue for the motivation of her actions. “She gets to have a say in what happens to her and gets to share how she feels about it with the audience,” said Schrag, a political science and sociology major.

With women taking on the roles of the Capulet and Montague boys, Poole said, “there’re lots of gender bending, which works well in Shakespeare and with our vision for this show.”

Video projections created by Holsopple and VACA students, Poole said, “add a broader perspective to the piece, connecting it to contemporary events.”

With Christian world views of hope, joy, love and peace embedded in both the script and U2’s lyrics, the creators and cast made an intention for the audience.

Senior Andrew Stoltzfus, a nursing major with a minor in theater, who will portray Romeo, wants the audience to feel the full tragedy of the play, he said, “the horror of what humans do to each other and to feel resolved to join in the “rebellion” against violence.”

“I hope they’ll realize the depth and impact love can have on any circumstance,” said Schrag.  “Love is power, and it is stronger and more effective than hate.”

Ticket prices for adults are $15; Senior (65+), non-EMU students, $12; EMU faculty/staff, $12; EMU and Bridgewater students, $6. Discounts are available for groups of ten or more. Tickets are available online through EMU’s Box Office online at www.emu.edu/boxoffice or by calling 540-432-4582 between 10:30 a.m. – 2:30 p.m. weekdays. Because of the intensity of the production, it is not suitable for children under age 14. Face masks are required.

Adapting the script and casting

Poole and Holsopple developed the adaptation in summer 2020. They cut archaic scenes, while keeping favorite Shakespearean quotes and the story intact. U2’s songs chosen include “Love and Peace or Else,” “I Still Haven’t Found What I’m Looking For,” “Grace,” and “Sunday Bloody Sunday.” 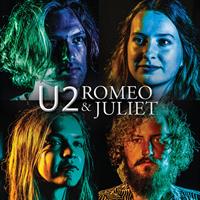